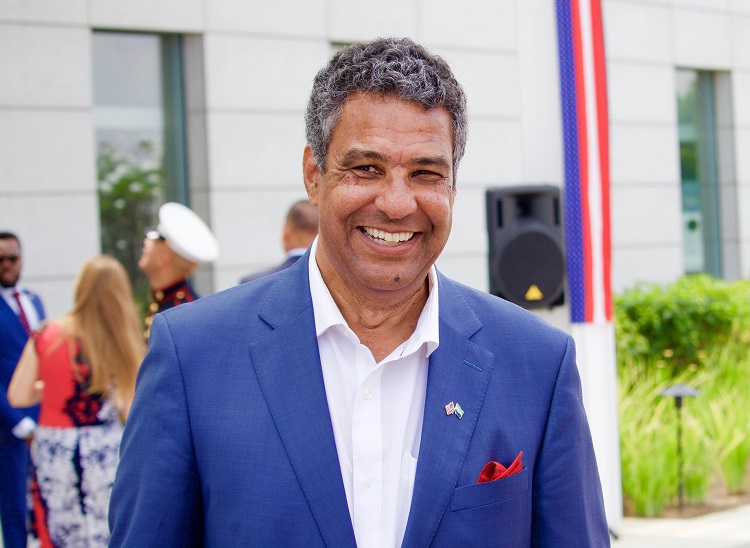 Presidents of the Constituted Bodies,
Ministers, members of the Government,
Representatives of the Diplomatic Corps and International Organizations,
Mayors,
Officers of the Defense and Security Corps,
Distinguished Guests,

• Thank you for joining us as we celebrate the 242nd anniversary of United States’ Independence. We celebrate this day in remembrance of the determination shown by the founders of our Republic as they proudly emerged from the colonial rule that denied them full participation in their government. Their efforts, led to a war of independence lasting nearly eight and one-half years, demonstrated the spirit of a people and stood as an example for all societies about the values that all Americans hold dear: freedom, equality, and the ability of all persons to succeed with determination. There efforts stood as an example to all about the value of freedom and the importance of free speech.

• The concerns addressed in the Bill of Rights and the subsequent Constitution communicated the desire of the inhabitants of those colonies to establish their own way of life. The fact that the United States Constitution has only been amended 27 times, mostly to clarify the document’s original intent, is a testament to the foresight and wisdom of our nation’s forefathers. However there was more work to be done, they were well-educated white male land-owners who represented only a minority of the population. The 13th, 14th, 15th, 19th, and 26th amendments are critical components to the establishment of our democracy. The first three amendments corrected the gross injustice of the slavery of Africans which afflicted our country during the first 89 years of its existence along with denying freed people their rights as full citizens. The 19th amendment guaranteed that women in our society, comprising more than 50% of our population, would no longer be denied a voice in the political process. The 26th ensured universal suffrage as of the age of 18 years old. The adoption of these amendments expanded the famous words of the Declaration of Independence so that they would apply to all Americans, not just a privileged few, “We hold these truths to be self-evident, that all Men are created equal, that they are endowed by their Creator with certain unalienable Rights, that among these are Life, Liberty, and the Pursuit of Happiness.”

• I share this brief summary of the founding and evolution of the United States to make the point about the values that our citizens hold dear. They are also the values that drive our engagement with other nations and cultures. We Americans are certainly guilty of having a passion to share our good fortune and the keys of our success with all. Regrettably, sometimes our enthusiasm approximates preaching which has on occasion led to an opposite result from our intentions. In the end, what we hope the people of the United States will always be recognized for, is our desire to share with all nations and cultures the knowledge that has enabled so many Americans to succeed and led to the creation of a prosperous nation.

• This brings me to the nature of the relationship between the United States and the Republic of Gabon. We share a similar beginning as nations that emerged from the experience of colonialism. We are also both multi-cultural countries that recognize the positive benefits to a country that spring from the mixing of cultures, languages, and ideas. We value peace, and Gabon’s history demonstrates how a nation whose citizens value peaceful cohabitation, especially in the area of conflict resolution, can prosper and grow. Gabon and the United States are both blessed with an abundance of natural resources that enrich the well-being of our citizens and provide us with a solid economic base on which to build our countries and improve the quality of life of our people. It is for this reason that our Embassy team is dedicated to support the success of many American investors and businesses already established in Gabon and seeking to encourage more investors to seek new opportunities here.

• The foundational elements a nation needs to be a successful democracy exists in both of our countries. Our history of a struggle for independence and freedom of expression defines our future. Our most important resource — our people – rightfully demand that we continue to implement those democratic ideals outlined in the U.S. Constitution, the Gabonese Constitution, and the Universal Declaration of Human Rights.

• While it is true that elections do not define a democracy, a democratic system cannot function properly without the benefit of the voice of its citizens as expressed at the ballot box. Likewise, there are responsibilities that come with rights. For instance, we all have the right to speak freely and retain the ability to have freedom of expression in all forms, provided this is done in a constructive and peaceful fashion.

• I said previously that the citizens of a nation are its most important resource, and the most significant component of that resource is our youth who represent the future of our nations; they carry our hopes and dreams for a more rich and just society. We have a responsibility while temporarily holding the reins of power to prepare the way for their success. This includes helping to creating academic and economic opportunities that will enable the next generation to thrive and prosper. The United States will continue to welcome students from Gabon and this Embassy team will continue to look for ways to promote exchanges permitting American students to come and learn here.

• Along with creating opportunity for the youth, we also must continue the struggle for equality of the sexes.

• It was not until August 18, 1920, fully 144 years after America’s independence, that women in the United States succeeded in enshrining their right to vote. We would not be the great country we are today without making that correction. A nation is able to meet its full potential only when it honors the value of all of its citizens – great women and great men alike. The issue of equality, especially the equal role of women in society, is a critical aspect of our culture and one that we vigorously promote in our global engagements.

• Another facet of the U.S. relationship with Gabon comes through the U.S. businesses working in the country. These companies are held to American standards such as the Foreign Corrupt Practices Act to combat economic corruption that ensures we will respect laws of fair competition. We continue to work with the Gabonese government to seek mutually beneficial trade and investment opportunities.

• This year we organized this event in a way that would demonstrate how we celebrate the Fourth of July, our Independence Day, all over the United States. This celebration represents a reflection of another value that defines our culture, one of informality and community, where families and friends gather to have picnics and enjoy the simple meals of hamburgers, hot dogs, and apple pie. We were successful, thankfully with the help of American businesses in Gabon alongside key Gabonese partners, in obtaining these typical American products for your enjoyment. I also want to thank our generous sponsors, the American Business Association of Gabon, and the efforts of my colleagues at U.S. Embassy Libreville for making this event possible. Additionally, the music these talented Gabonese musicians are playing is American jazz, Jazz, which draws its roots from the African-American community and reflects the music and melody of Africans brought to the United States hundreds of years ago.

• Our entire Embassy team is pleased to welcome you to this uniquely American Independence Day celebration and we again thank you for sharing this special day with us.