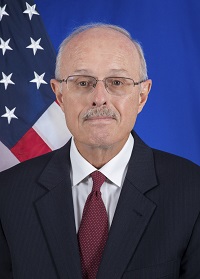 Ambassador Robert E. Whitehead served as the U.S. Ambassador to the Togolese Republic, May 2012- July 2015. Prior to that, he spent three years as Chief of Mission in Khartoum, Sudan, an assignment that concluded in July 2011shortly after the independence of the new Republic of South Sudan. An African specialist, Ambassador Whitehead spent a total of 24 years in Africa in nine different countries. He served as a political officer in Kinshasa (then Zaire, 1985-1987) and in various executive positions in U.S. embassies in the Central African Republic (1991-1994), Rwanda (for a six-month period in 1994-1995, immediately after the genocide), Zambia (1998-2001), and Zimbabwe (2001-2004).

He also completed tours in Guyana, Belize, and Romania and served as the first Consul-General to Juba, South Sudan (2006). His Washington postings included a tour as Senior Inspector in the Office of the Inspector General and two assignments as Director of the Africa Office in the Bureau of Intelligence and Research (2006-2008 and 2011), an all-source intelligence analysis office with a foot in the State Department and a foot in the Intelligence Community. During his diplomatic career, he was awarded multiple Presidential Performance Awards and multiple State Department Meritorious and Superior Honor Awards; he was also inducted as a Commander in the Order of Mano and a member of the Central African Order of Merit.

Following retirement in November 2015 after 33 years of service, Ambassador Whitehead moved to Ft. Pierce, Florida, where he has remained active on foreign policy issues. He has spoken at university seminars and conferences and currently serves on the Advisory Council of the Fielden Institute for Life Long Learning, a foundation affiliated with the Indian River State College. He has been recalled to service thrice by the Department of State, serving a four-month stint as Chargé d’Affaires at the U.S. Embassy in Burundi (2016), six months as Charge d’Affaires at the U.S. Embassy in Kinshasa (2017) and four months as Counselor at the U.S. Embassy in Bangui, Central African Republic (2018).

Born in Crawfordsville, Indiana, Ambassador Whitehead completed his studies as a graduate fellow at Southern Illinois University and subsequently earned a certificate in French from IFCAD in Brussels. Before joining the Foreign Service in 1983, he taught English literature and linguistics as a Fulbright Lecturer at the University of Zaire campus in Bukavu, Kivu Province (1976-1980), and English at Northern Illinois University (1981-1983). Ambassador Whitehead is married to the former Agathe Mukabutera.
Their son Wesley is a career employee of the U.S. Department of State.