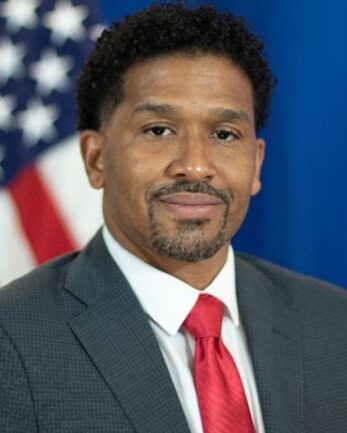 David G. Mosby, a career member in the Foreign Service, David has served in Africa, the Caribbean, Europe, South America, and Washington. In September 2022, he assumed the position of Deputy Chief of Mission at the U.S. Embassy in Libreville, Gabon.

In Washington, David served as the State Department’s Senior Country Officer for Italy and the Vatican and as an international affairs advisor to the Ranking Member of House of Representatives Committee on Appropriations in Congress.  He also served in Brasilia, Brazil and Bujumbura, Burundi.  Before joining the Foreign Service, he taught English in Nagoya, Japan.

David holds a bachelor’s degree in political science from Iowa State University and a master’s degree from National Defense University’s Eisenhower School of National Security and Resource Strategy.  He speaks French, Portuguese, and Spanish.  David is a proud native of Chicago, Illinois, and is an even prouder father of two sons, Malcolm and Matteo.