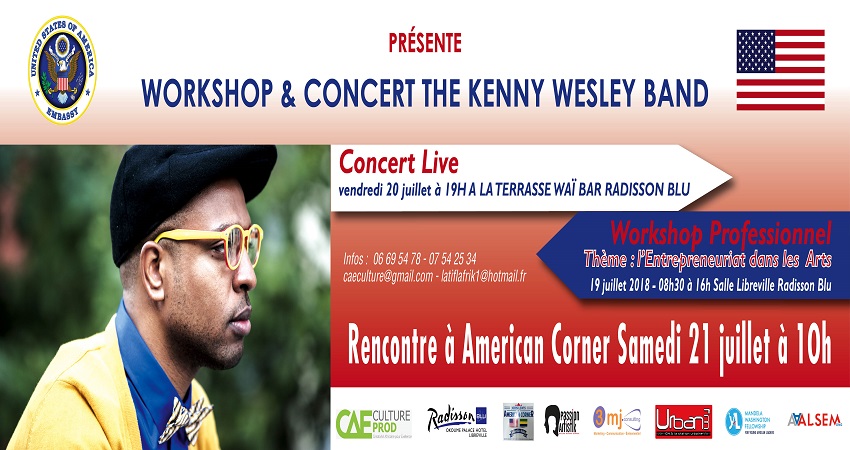 While in Libreville at the invitation of the U.S. Embassy in Gabon, American singer, composer and multi-instrumentalist Kenny Wesley led a series of activities including a workshop on cultural and creative entrepreneurship.

The workshop held on Thursday 19 July at the Radisson Blu aimed to offer cultural professionals the opportunity to explore ways and means to better promote and support cultural entrepreneurship.

The 110 workshop participants, including musicians, dancers, visual artists, actors, poets, designers, photographers, filmmakers, arts managers, cultural organizers cultural journalists and others, discussed with artist Kenny Wesley on how to make a good living from their work.

This was the first time Gabon hosted a workshop of this scale on the theme “Entrepreneurship in the Arts”.

Kenny took this opportunity to provide advice on the elements of an effective brand – providing the techniques to outperform the competition, establish a network, the means to obtain grants and external endorsements.

He then hosted several concerts with the rest of his band members: Zachary Cutler and Dante’ Pope.

Over 350 people attended the free public concert that was held on Friday evening at the Wai Bar at the Radisson Blu.  The concert featured original songs written by the Kenny Wesley Band, as well as standards.

The soulful nerd – Kenny Wesley – is considered as a lyric tenor with a voice spanning more than four octaves.

He represents the new generation of soul, jazz and blues singers. He has a charisma and a powerful voice that can interpret many styles of music.

Kenny has received numerous awards and performs regularly on the most prestigious stages in the world. He sings and writes in various languages.