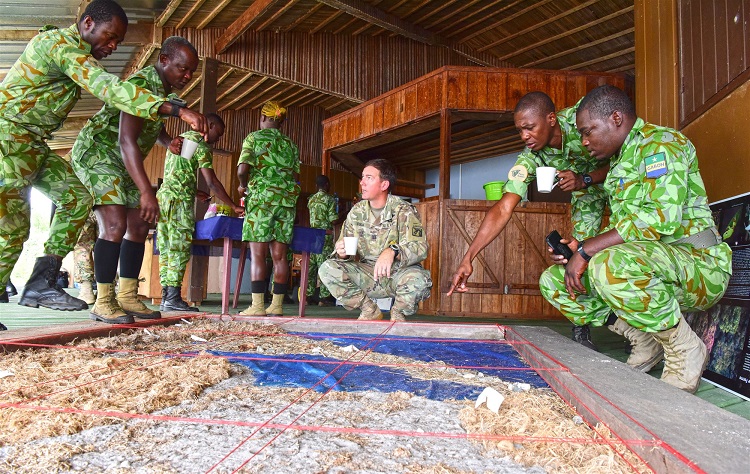 LOANGO, Gabon — According to the U.S. State Department, wildlife trafficking, illegal poaching, and transit and trade of natural resources generates more than $10 billion a year for transnational organized criminal networks. This illegal trade has the potential to threaten regional security, endanger wildlife species and put the natural resources of Gabon at risk.

Central Africa has a plethora of protected wildlife, for example: gorillas, chimpanzees, elephants and mandrills. Gabon is home to thirteen animal reserves, including Loango National Park, internationally known for its photographs of surfing hippos. In Loango National Park, U.S. Army Soldiers have been training Gabonese park rangers, known as EcoGuards, to deter poachers and deny opportunities for illicit trafficking.

Soldiers from the 83rd Civil Affairs Battalion have been conducting training with EcoGuards since April to build partner capacity and support civil military development. This first iteration of training is expected to end this month.

About three quarters of Gabon is covered in rainforests, which are homes to protected wildlife. The diverse environment not only attracts tourists, but also poachers.

The U.S. and Gabon have a long-standing relationship. Both countries share a common interest in protecting Gabon’s natural resources.

“We have a very good partner in Gabon, especially in the area of protecting the territory integrity of the country and the forest,” said Joel Danies, the U.S. ambassador to the Gabonese Republic and the Democratic Republic of Sao Tome and Principe. “This kind of training is critical to the U.S.-Gabon partnership because it first demonstrates the commitment that the U.S. is making to Gabon; it’s demonstrating the care that we have for the entire environment, for protecting the flora and fauna of the country, and for helping the Gabonese protect their borders.”

The training was tailored to each class according to the needs and requests of the EcoGuards and the managers at the various parks. Topics varied from casualty care in austere environments, military orders, mission planning, key leader engagements, detainee operations, site exploitation, civil military operations, the fundamentals of patrolling, and tracking and operating geospatial equipment.

As of the end of September, the civil affairs team completed seven iterations with more than 100 EcoGuards, 14 managerial staff and 33 Gabonese military members responsible for counter illicit trafficking operations.

“Our EcoGuard partners face tremendous amounts of risk every time they step into the jungle on patrol.” said the Civil Affairs Team 8324 team leader. “They routinely traverse some of world’s most challenging terrain to make their way toward armed poachers. They knowingly face an unforgiving environment and they do this with upmost resolve. Their motivation in protecting their nation’s finite resources and wildlife has been an inspiration and an incredibly rewarding mission to support.”

State Department, U.S. Army Civil Affairs, EcoGuards and park managers work together in order to build partner capacity and strengthen relationships with a common goal to protect wildlife and the natural resources of Gabon.