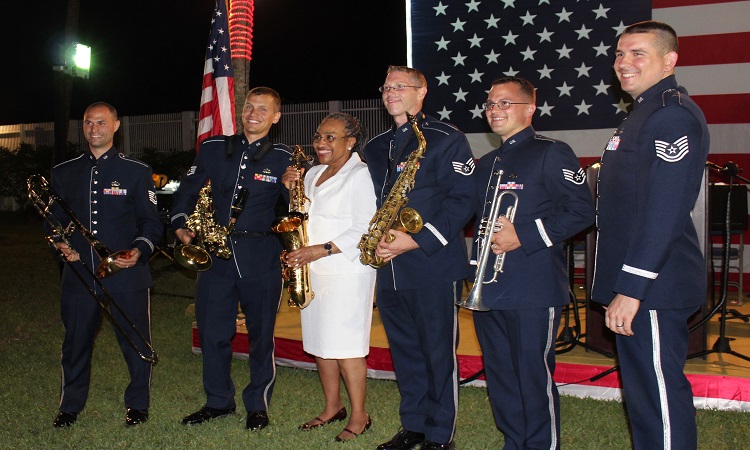 Thank you for helping us to celebrate the 241st birthday of the United States.  It is a great pleasure to see so many friends and colleagues here this evening, at what will likely be my last Independence Day celebration in Libreville.

I want to especially thank the United States Air Force for sending a Jazz Combo from Ramstein Air Force Base in Germany to be with us to make this occasion special, and our fine Marines for their participation today.

Independence Day – ours, yours, or anybody else’s – is an appropriate time for reflection.  Everything we are and can do today, we owe to the hard work and sacrifice of those who came before us.

Americans are very attached to our Independence Day and the ideals that it represents:  service, generosity, sacrifice and optimism.  July 4th is a day of celebrations, parades, fireworks and picnics.  But we are also fiercely proud of our Declaration of Independence, parts of which many Americans can quote from memory.

Perhaps the most celebrated passage of the Declaration of Independence states:

“We hold these truths to be self-evident, that all men are created equal, that they are endowed by their Creator with certain unalienable Rights, that among these are Life, Liberty and the pursuit of Happiness.  That to secure these rights, Governments are instituted among men, deriving their just powers from the consent of the governed.”

I don’t think there is a more powerful description of what democracy means.  The concept of governments being instituted among citizens, and deriving their legitimacy from the consent of the governed, is so central to democracies that Abraham Lincoln evoked it 87 years later in 1863 in his famous Gettysburg Address, referring to “government of the people, by the people, and for the people.”

In the year since I last stood before you, many countries around the world held consequential elections, the United States, Gabon, France, The Netherlands, São Tomé & Príncipe among them.  Some saw predictable outcomes, others surprising ones.

New and returning governments must figure out how to do the best for the governed, and to earn the confidence that the electorate has placed in them.

In some countries – my own included – unhappiness about electoral results has awakened activism in many people.  Americans are watching their elected officials closer than ever before, to the great benefit of our country and our democracy.

Some are so motivated to change things that they are running for office themselves.  Whatever prompts it, having an active, engaged population that expresses its views and holds its government accountable, is not only good, but is also essential.

A government under the watchful eye of its citizens – and responsive to them – is more likely to act responsibly and, in the process, secure its legitimacy.

As I have travelled throughout Gabon, I have emphasized the value and importance of civic education.  In the United States at a very young age, we learn about the responsibilities of citizenship:  school children run for class president; they serve as leaders in youth organizations; they become captains of sports teams and treasurers of school clubs.

A well-functioning democracy requires everyone to play his or her part:  citizens contribute, and government leaders spread the wealth – not to themselves, but to the population they serve.

I have sometimes heard that we in the West try to impose our values on African nations.  With the recent passing on June 22 of Sir Ketumile Masire, Botswana’s second president, I’d like to cite this example of African leadership.

A cattle herder in his youth, as president he used the revenues from the discovery of diamonds to uplift Botswana’s ordinary citizens, by building schools and roads, by improving health care , by expanding access to clean water, and by improving farming techniques.

To quote President Masire:  “A man is never strong until he says what he believes and gives other men the chance to do the same.”

As a diplomat, I have tried to inculcate the values of service and generosity.  To my embassy team, to the American people and to the people of the countries to which I am accredited – this is central to my work.

I’m proud to say that I think our activities over the past year have underscored our commitment to serve.

Whether supporting the arts and showing how arts can be a vector for economic growth, demonstrated by our recent Dancing to Connect program;

Sending 14 promising Gabonese leaders to the United States on exchange programs so they can apply their experiences back home;

Training judges, prosecutors, eco-guards and others on preventing, investigating and prosecuting illicit crimes;

Preparing leaders and troops to responsibly carry out peace keeping operations in the Central Africa Republic;

Or helping women entrepreneurs improve their products and find new customers, my team and I have done our best to be good representatives of both the United States and Gabon.

In closing, I’d like to thank all of you – our friends, our contacts, our partners — for your support and cooperation not just this year, but throughout my tenure in Gabon.

Let’s raise a glass to the enduring friendship between Gabon and the United States.

Thank you and please enjoy yourselves.